After two weeks of not painting my nails, I thought it was time for some simple, but beautiful nail art. I've used the pink Etos polish (also a prize in my giveaway) and Black Cab by Rimmel London. The silver I used is from Luminelle (Yves Rocher). 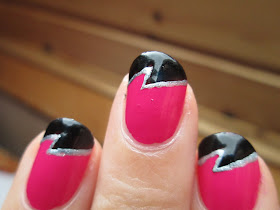 Hahaha I tried taking pictures of both hands, without the help of anyone else. It didn't go so well, as you can see below :-p 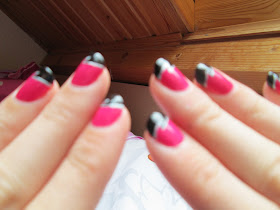 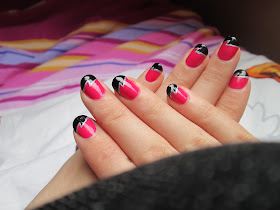 My boyfriend thought it was based on a logo or something, according to him it looked like a band uniform. That triggered my association with a gymnastics outfit. So that's what I'm calling this one! After wearing this a while, I thought I'd spice things up a bit with Lady Luck from the Sally Hansen Gem Crush collection. It was awesome... 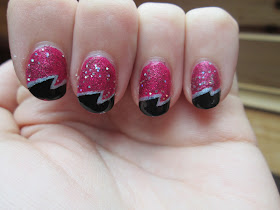 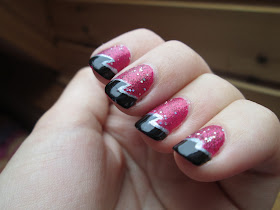 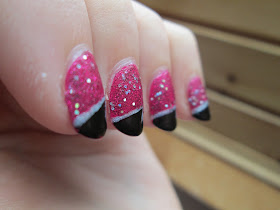 Now it looks even more like a gymnastics outfit! Hahaha but soooo pretty :D I just LOVE Lady Luck layered over pink. It just looks so stunning.

The Gem Crush collection dries REALLY fast. It's also kind of matte when it's dry. I haven't tried a top coat over it yet.

Do you think the nail art looks like a gymnastics outfit? Or do you have some other idea when you see it?
op 4:13 PM
Share