Different Dimension - Totally, Sparkles Like Edward and Imitation is the Most Sincere Form of Flattery

Hi there! Today I have some swatches for you! I bought 'Totally' and 'Imitation is the Most Sincere Form of Flattery' from Different Dimension. I got an extra surprise mini in my package as part of a Mother's Day promotion, I received 'Sparkles Like Edward'. Let's see what we have here! 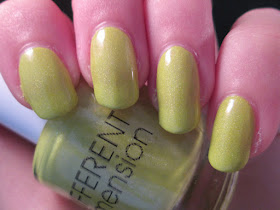 This is 'Totally' from the 80's Baby Collection. It's described as a neon yellow scattered holo, but it leans more towards a greenish kind of color. I'd dare to call it a light lime with an awesome holo-ish effect. Don't expect the rainbow sparkles you would see in a linear holo, this is a bit different. I didn't experience a rainbow while wearing it, but it has something... It's like there is a layer underneath the polish that you get a glimpse of if you look closely. Like a different dimension! 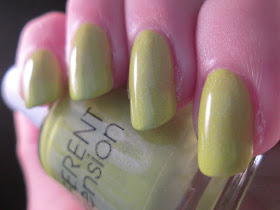 It's a nice color in indoor lighting... 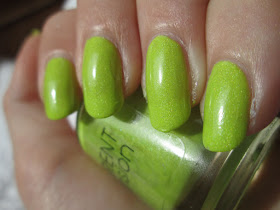 ... but bring it into the sunlight and BAM! Neon lime! This brings out the holo quite nicely. 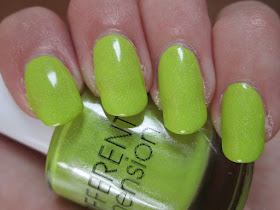 The formula was a dream, by the way. It went on smooth and was opaque with two coats, the kind of quality I've come to know and love about Different Dimension ;-) 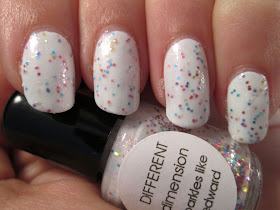 Next up is 'Sparkles Like Edward' which I assume has something to do with all the hype around the Twilight saga. This is a polish I wouldn't have bought for myself, but that's the fun part about surprise (and free) polishes! 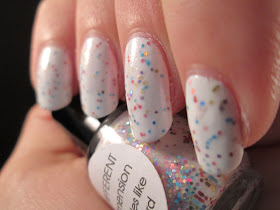 This is two coats over a white base. It's hard to get this one opaque and I didn't want to put all of my mini bottle in just one mani. So a base is recommended (doesn't have to be white, ofcourse).

Glitter placement was a challenge and I found myself dabbing the glitters onto bald spots after applying a coat. 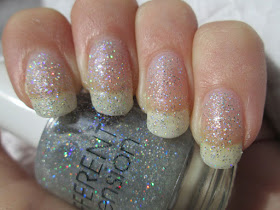 And last but certainly not least, we have the beautiful 'Imitation is the Most Sincere Form of Flattery'. This pic shows one coat over just my base coat because this is no ordinary polish... 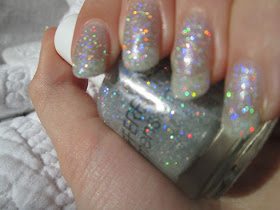 It's packed with awesome holo glitter! The out of focus shot is just so you can see for yourself, this is in sunlight by the way.

Ofcourse you will neeeeever ever ever get this opaque unless you have the patience and the wallet to go through 7 coats per mani, so layering is a must. Not a hard task, I'd say, as this polish can be used as a light glitter topper with a single thin coat. 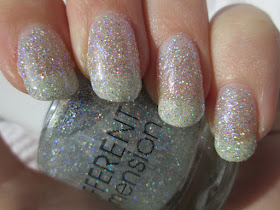 OR... you can just have loads of fun and wear it on its own, like I've done! This is three coats over just my base coat.

As any true glitter bomb, your nails will feel gritty after applying this polish. One or two coats of top coat will do the trick. 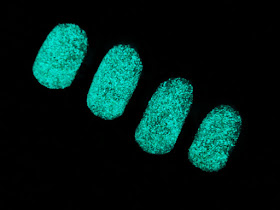 And that's not even it! It also glows. In. The. Freaking. DARK! I'm telling you, you need this polish. It's amazing, it glows SO bright! There was some glow pigment that separated from the polish in the bottle, and this is what it looked like without having shaken the bottle. That means there's MORE... 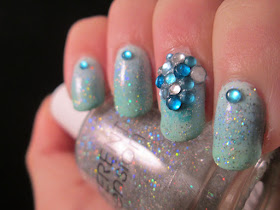 It's just the best freaking polish EVER so I had to use it right away for some nail arrrrrrrrrrt! 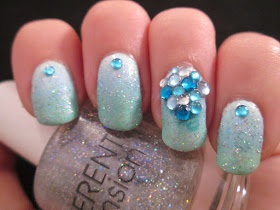 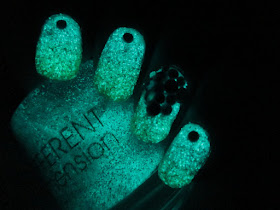 I'm in love with the amazing glowshots I see on other blogs and IG accounts. It's the best feeling to be able to take some super glowshos of my own!


What's your verdict? Which of these polishes can't you go without now that you've seen their awesomeness?
op 8:23 PM
Share