Who's up for some indie drama?

I should start by saying that I'm writing this post to inform you, not to make anyone look bad. I share with you my polish adventures, that includes the bad experiences too. Today I have quite a story about a big purchase I made in a store called Polish Me To Go.

I have pleasant experiences with her customer service. The seller gave me a full refund without hassle. She also refunded me for the import taxes and fees and she's been friendly in all of her e-mails to me.

But that's about it.

I'll try to keep this short! I've been seeing these beautiful glow in the dark polishes on my Instagram feed and when I heard that the store soon wouldn't be shipping internationally anymore, I placed a huge order, I wanted one full sized bottle of each color. That came to $137 (at the time, prices are substantially higher now) excluding shipping. Shipping came up to $37,50 so I payed a total of $174,50 for 19 bottles of polish. That's about $9,20 per bottle. Good deal, right? Nope...

It took the package two weeks to reach me and I was over the moon with my new colors! Until... I opened one of the bottles and discovered that the brush had severely bent bristles. My heart stopped and I nearly passed out as I discovered almost all of the brushes were like this.

This is just a small selection of pics I took with my phone. The worst part is that it didn't stop. The brushes were too big for the bottles so getting them back in was hard work and needed precision. The bristles were extremely prone to bending and even touching the rim of the bottle was enough to send a few of them upwards again. So that was pretty useless... 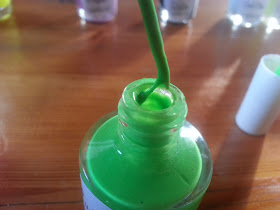 There was one polish that was absolutely the most amazing piece of crap that I have ever seen. It was the green neon that was so slimy, it won't even move when I turn the bottle upside down. How this could even happen is a mystery to me and no amount of thinner seems to be able to solve it.

There were more polishes like this but none as bad as this one.

As if this wasn't enough, there's MORE. There was pigment stuck to the bottom of the bottles, big huge lumpy mountains of pigment. This affected the color of the polish, as well as the glow effect. I know you're supposed to shake but seriously, I was shaking 'till my arm fell off but nothing happened. The mixing balls were stuck firmly in the pigment. I wiggled an orange stick in there to get the pigment loose, but all this did was make it float around and then sink back down again.

After I overcame my shakiness over so much polish drama I wrote an e-mail to the seller, detailing every single problem I'd come across. She quickly responded, saying she was very sorry and that she'd send my whole package again the same day at no cost for me, that she would pay the import taxes and fees and that she added tracking in the hopes the package would reach me soon. It took her 10 days to mail the package. 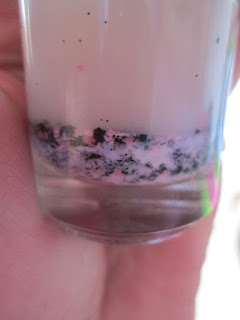 I was full of hope but two weeks later, drama again. The caps were different and the brushes were much better, so no more bending bristles! Unfortunately, this changed nothing for the formula. Pigment problems all over the place and even sinking glitter.

I promise I've tried to shake and shake but it's completely sunk again after 5 minutes. Not to mention that there were more bottles with the slimy polish now! I emailed her about it and she said that she was aware of the problem, she was in the middle of reformulating those colors but sent me the old ones. NOT okay! 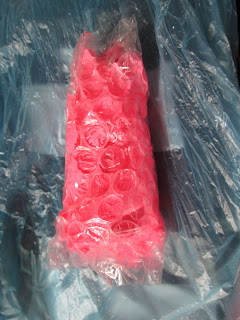 There was a bottle missing from the package and one of the pink bottles was broken into little pieces, the polish had leaked all over the other bottles. I was so sad.

The shocker was that somehow she had put a declared value of $360 on the customs form so I was charged an unbelievable amount of taxes, while the value of two packages + shipping didn't even add up to that amount. I was completely shocked when I got the bill from the mail man, and I didn't get to keep my package or even look inside if I didn't pay. Luckily she refunded me, it's so amazing of her to keep that promise despite the high fees.

The glow and the colors are beautiful, I just wish I could get them on my nails. The formula is gritty and thick, it dries in the bottleneck while I'm trying to use the polish and some of the colors have specks of pigment in them. I actually saw it described on another blog as 'a cool speckled effect'. Poor girl didn't even know she had defective polish.

If I had known about this, I wouldn't have offered a set of mini neon polishes to be shipped from the store as a prize for my nail art contest. When I choose a winner this weekend, I'll offer her (or maybe him :-p) a more than worthy solution. I'm just so sorry about all this...

It has been an awful experience with a lot of stress, but I guess that goes double for her. Nail polish is a way for me to express myself, to make contact with the world and to have fun without stress. I hope I've been honest without being too brutal, this is just how I feel and how I've felt throughout the whole process of my failed order. Thank you for reading!
op 1:57 PM
Share