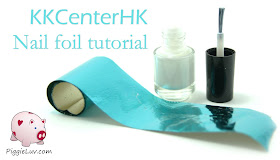 Good day to you, beautiful ladies! The kind people at KKCenterHK were nice enough to send me some products to try out for you! Since most of you have never used nail foils, I've made a tutorial for you, and I'll tell you some tips and tricks along the way. Let's get started! 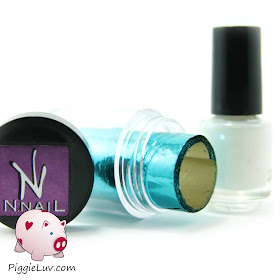 I received a blue nail foil, it's called Fresh Green Blue on the website. It looks like an icy blue color to me. It comes as a roll in a sturdy plastic container and when you roll out the foil it's 4cm/1.5" wide, and 150cm/59" long. That's a whole lot of nail foil! I cut of a piece that was damaged, cut off enough foil for two full manicures and it didn't even make a dent. There's a lot of material to use!

I had no idea how to work with these nail foils but there was a 5ml bottle of nail glue included in my package. Believe me, you're going to want this when you're using nail foils. It's weird, but it works.

This is the preparation! First, you apply a base coat and paint your nails a color that matches with the foil you're going to use. If you mess up and get a hole in your foil, it won't be too obvious.

Cut small pieces about the size of your nails, I used a small pair of craft scissors for this part. The foil is so wide that you can cut off a strip and cut it in half again. My squares were about 2x2cm and they fit my nails perfectly.

Now we're getting to the good stuff! Open up your glue, paint your nails with it like you were using regular polish, and be sure to reach all the corners of your nail. The glue is white as you apply it, and it quickly starts to become invisible (ahhh it's magic glue!). Now this part is important:
LET THE GLUE DRY! It sounds weird, but once the glue is dry, it's really sticky and it will work great. I've done some experiments prior to my tutorial, and I've tried doing this with topcoat, normal glue and the special nail foil glue (both wet and dry) and the latter worked best by far. It was way less messy and it sticks to the nail foil better, giving better coverage (less bald spots).

When your glue is dry, pick up a square of foil and gently place it on your nail. I'd suggest letting the middle line of your nail touch the foil first, and then carefully smooth it out to the sides by stroking your fingers over the foil. Apply some pressure here, it will make the foil adhere better.

Make sure the foil is touching every nook and cranny of your nail, leave no part untouched. Use your fingernails of the other hand, or an orange stick, to reach the sides of your nails. After this, you can remove the foil gently and you'll see that the blue part sticks and the rest will come off! 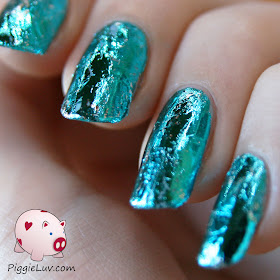 Tadaa!!! As you can see, my first time with nail foils didn't go so well... I have a lot of creases which I'd rather not have, but I think this is mostly caused by the curve of my nails. I don't really like this look, it's too in-your-face for me and I took it off quickly after finishing my pictures. Maybe this would look better with a different kind of foil, they have lots of different choices!


I do want to show you what happens when you apply top coat... 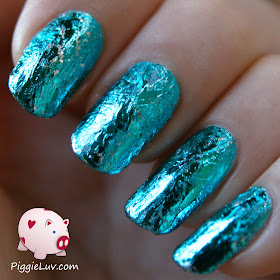 Owwww noooo!!! What happened? When you apply top coat, the nail foil gets extra wrinkly. It's a better idea to just be really careful with your nails, unless you like the wrinkly look better. 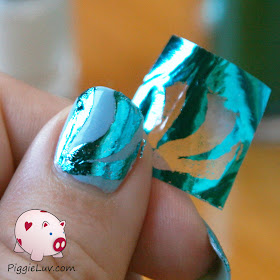 Don't like the full foil mani? No problemo! You can use the glue to draw designs and have the foil only stick where you want it to. I like this option a LOT better. Look what I made! And as you can see, the foil comes off as the inverse of the shape you drew. There's a thin layer of material over the foil that makes it so easy to remove the excess foil.

Remember, you can get this nail foil and much, much more nail related stuff at KKCenterHK. Also check out the different kinds of foils in their shop. Thanks for watching, yet again!

I received the nail foil & glue in this article as a press sample for an honest review. Opinions expressed are 100% my own and not influenced in any way other than the quality of the product itself.
op 9:06 PM
Share