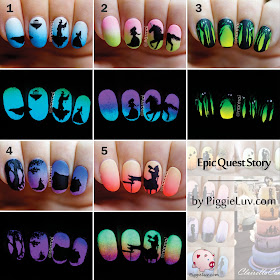 You asked for another nail art story and here it is! Remember our princess from last time? She's up to no good again! All of it is completely freehand with black acrylic paint and my Roubloff 00 brush, now let's dive into the story! 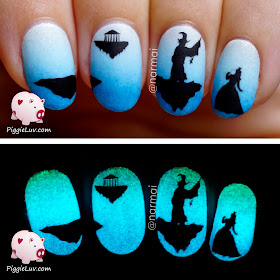 Chapter 1. In the lands of the Floating Islands, lives the Wise Wizard of the Winds. The princess gets summoned by him because he's heard what she's done to the poor prince (you know, leaving him to get eaten by the dragon) and he threatens to punish her. Or, to make up for her bad deeds, she can complete a quest for him.


For this chapter, I used  Serum No. 5 Moonlight, Blue Blazes & Globalt Blue. 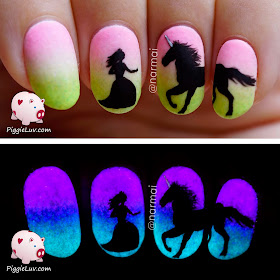 Chapter 2. She travels to the east to find the Great Magical Unicorn. She tells it what the Wise Wizard said and before she knows it, it starts to gallop off! The Unicorn's Great White Horn starts to GLOW! Just in time, the princess is able to jump on its back and she rides off with the Unicorn!


This awesome candy background gradient is made with Serum No. 5 Awesome Blossom, Starlight & Kiwi Glow Now? and I used Guiding Light for the horn. 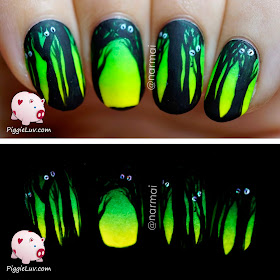 Chapter 3. Then suddenly, the Great Magical Unicorn comes to a halt and she steps off. She finds herself at the entrance of a deep, dark forest. She understands that she must go this last part of the way alone, to prove her resolve. But there are creepy crawlies lurking out from up in the trees *shiver*


The background gradient is Serum No. 5 Solar Power & Krypton-brite as well as Parrot Polish Grinch Glow. I used Serum No. 5 Guiding Light for the eyes. 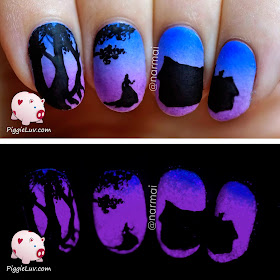 Chapter 4. In the distance, there is a crooked little house. As she emerges from the forest unscathed, leaving behind the creepy crawlies, she wanders closer to the house...

My camera reeeeally didn't like this glow! It was freaking out! 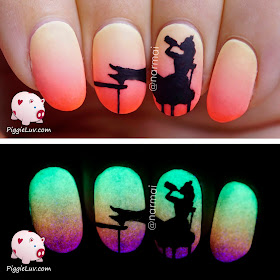 Chapter 5. Inside, there's nobody. It's nice and quiet and she's come a loooooong way so... She kicks back with a nice bottle of magical elixir! That Wise Wizard can go kick rocks! She doesn't have to answer to anybody! Or does she... To be continued!

And for this last chapter, the polishes I used are Serum No. 5 Day Glow, Atomic Peach & Infrared.

Sorry for the complete Serum No. 5 love parade but it's one of the very best glow brands I've ever found! I buy mine at Hypnotic Polish, a Dutch stockist. I've also gotten some as a press sample to share with you here on the blog ;-)

I received Serum No. 5 Moonlight, Glo-balt Blue, Starlight, Kiwi Glow Now?, Guiding Light, Laven-daringly Bright-Wisteria-ously Bright, Day Glow, Atomic Peach & Infrared and Parrot Polish Grinch Glow as a press sample. I bought all other polishes with my own money. Opinions expressed are 100% my own and not influenced in any way other than the quality of the product itself.
op 7:13 PM
Share