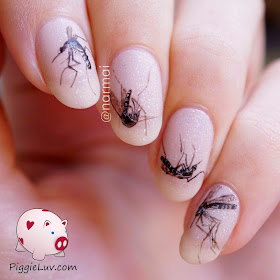 These are NOT real mosquitoes that I glued to my nails, haha! I know I've done some weird things in the past but that's a bridge too far, even for me. They're freehand with acrylic paint, don't worry :) There's also a tutorial so click to see more! 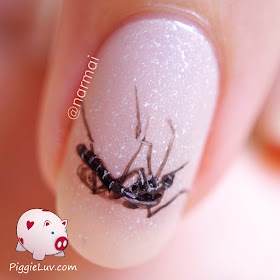 There's a story behind this nail art. Every single night this week, I've been taunted by a single mosquito who keeps me awake. SO annoying! They come in through the cracks in my roof and there's no keeping them out. So I painted dead mosquitoes to send them a message...

... and it worked! I didn't have any problems last night! Only this morning, I found out my mom had stomped it to death against the wall. Ah, whatever works, right ;-) 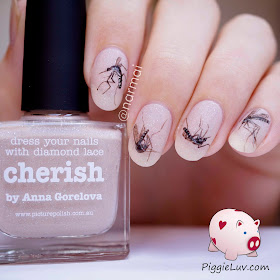 I used one single coat of piCture pOlish Cherish for the base and mattified it with OPI matte top coat. The brush I used to paint the mosquitoes is my Roubloff 00 detail brush.

I like to show my nail art to my friends when I'm done, to get a second (and third, and fourth) opinion and they alerted me to a very similar mani that @_lastrega did a while back, but I hadn't seen it before I did mine. I contacted her and let her know that this is just a case of two people having the same idea, it happens sometimes. I didn't want there to be any confusion or bad feelings :)

Music is "Mosquito Coast" by Iso Brown
Available on http://freemusicarchive.com

I received piCture pOlish Cherish as a press sample to make a nail art tutorial with. Opinions expressed are 100% my own and not influenced in any way other than the quality of the product itself.
op 7:16 PM
Share