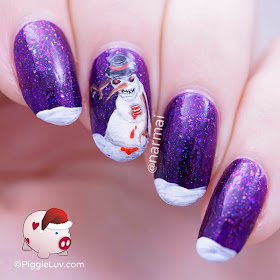 What's that lurking in the dark, behind that pile of snow? And what did Santa bring you...? Okay I might be missing Halloween already :-p So I figured, why not make horror Christmas nail art? There's two designs for the price of one, plus a video tutorial, so click to see more! 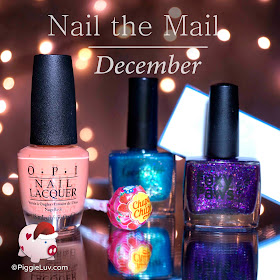 The December Nail the Mail box is AWESOME! It comes in the familiar sleek black box and you get a buffing block & lollipop as extras!

I showed you Lacquester Taling two days ago, and so today I'll show you Step Into Christmas from Foxy Paws Polish, and OPI Is Mai Tai Crooked? Please be aware that the OPI polish differs from box to box, you might not get the same one :) 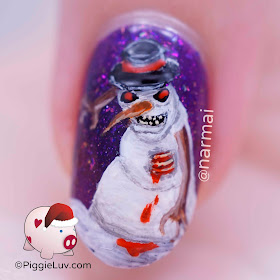 First up we have Frosty the Evil Soul Sucking Snowman, and he's coming for YOU!!! Just kidding, he just got attacked by angry Rudolph and didn't want to die yet, so he made a deal with the devil and now he consumes little kids' souls & traps them in his icy body. Any minute now, you'll see some fingers wiggling in between his ribs... 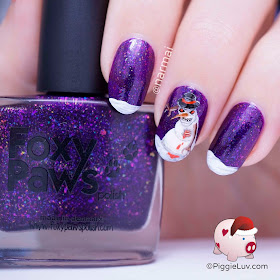 The awesome background polish is Foxy Paws Polish Step Into Christmas, a box exclusive for this month's Nail the Mail box. It. Is. Perfect. I haven't been wowed by a dark polish like this in ages! It's one of those jelly-like polishes that make you want to scream and pull your hair out by the first coat because it looks like it's never going to be opaque, but then the second coat suddenly brings it all together and you can't remember what the problem was because there is no more problem. In the world. Because this polish made it all better. And now you're blissfully happy. 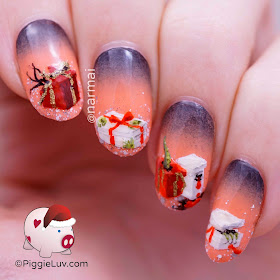 On to the next round of horror! Looks like someone wasn't a good girl (or boy) this year... What kind of creepy crawlies could be in there, you think? And what made that box so grossly mouldy?? 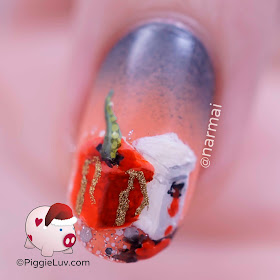 I made a background gradient with OPI Is Mai Tai Crooked? from the December Nail the Mail box, and piCture pOlish Black. I also added a bit of snowy bling to the tip of my nails using SuperChic Lacquer All Flocked Up, making a sort of glitter gradient. 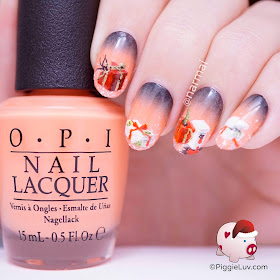 I think it's safe to say that this polish drove me NUTS! How do you make a Christmas design with a soft orange polish?! Yeah that had me screaming my lungs out :-p I *think* I made it work though. And the video tutorial below will tell you how to make your own gruesome Christmas gifts!

I received the Nail The Mail box, Kiesque Liquid Palisade, STYLondon Diamond Coat &the STYLondon UV lamp as a press sample. Opinions expressed are 100% my own and not influenced in any way other than the quality of the product itself.
op 7:12 PM
Share