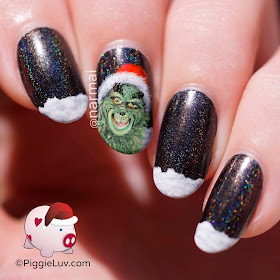 "Then the Grinch thought of something he hadn't before. Maybe Christmas doesn't come from a store. Maybe Christmas, he thought, means a little bit more!" I had a MASSIVE headache while painting this nail art design so at one point I had to stop and accept it as it was. You'll want to inspect the macro photo for yourself ;-) Click to see more! 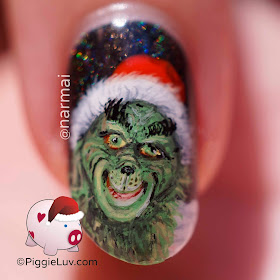 I've seen a lot of Grinch nail art already this year (and other years) but I don't remember ever seeing someone do the 2000 Ron Howard movie version. So voilá! His right eye is messed up and his eyebrows are too thick, and his mouth looks different than I wanted it too but... I like the polish behind it :-p 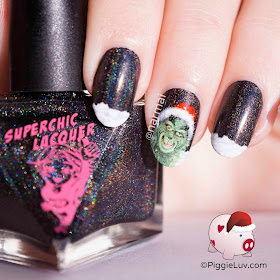 Which is SuperChic Lacquer R.E.M., the black holo polish of my dreams. Opaque in one coat and just overall dreamy. I was happy to get some sun shots of it!

There is no tutorial for this design, I repeat, no tutorial. It was hard enough to paint without a camera 2 inches away from my nail :-p

I received SuperChic Lacquer R.E.M. as a press sample. Opinions expressed are 100% my own and not influenced in any way other than the quality of the product itself.
op 7:12 PM
Share