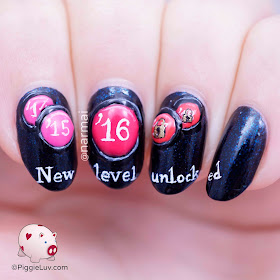 New level unlocked! 2016 is now available to play! Congrats, all of you made it :D How did you spend your New Year's eve? I put the couches together, gathered all the pillows and watched TV shows in my little 'nest', hihi! There's also a video tutorial for this design, click to see more! 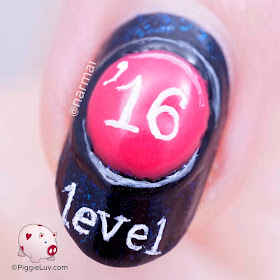 The background polish is Foxy Paws Polish The Void. It seemed black when I first saw the bottle but at closer inspection, I noticed tiiiny little blue flakies and I love it for this design :) 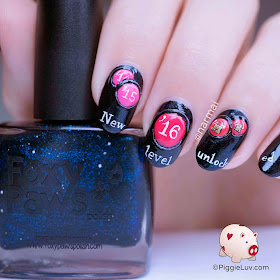 The buttons are actual 3D buttons! I kept wanting to push them to see what would happen :-p

I used STYLondon Azalea for the big middle button, Pink Bubbles for '14 and '15 and the two locked levels are made with Coral Reef. Onyx forms the black rim around the buttons and I added the highlights & text with acrylic paint and my Roubloff 00 detail brush.


Music is "Pamgaea" by Kevin MacLeod
Available on http://incompetech.com

I received Foxy Paws Polish The Void, and STYLondon Azalea, Pink Bubbles, Coral Reef & Onyx as a press sample. Opinions expressed are 100% my own and not influenced in any way other than the quality of the product itself.
op 6:54 PM
Share