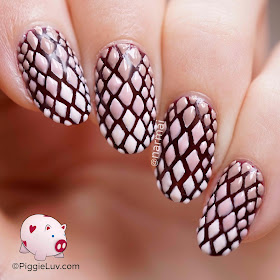 It is said that dragon scales bring strength of heart to those who carry them. A whole bunch fit on my nails so wow, imagine how determined I must be! This whole design was done with gel polish, no regular polish, which is weird for me, but also very cool. I have a video tutorial for you! Click to see more! 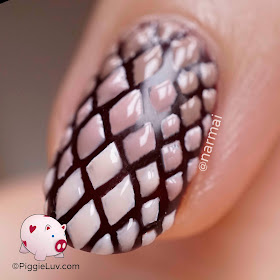 I painted the basic shaped with white acrylic paint and my Roubloff 00 detail brush first. IT gave me a nice opaque base to paint on top of, using STYLondon Sandy Lane, Barely There & Ballerina. But before doing all of this, I mattified the base a little by rubbing it with alcohol. It gives it a nice contrast :)

It's funny because I wouldn't normally have chosen these colors. I'm not a beige kind of girl, but actually I really love this combo. It's staying on my nails for the WHOLE weekend! 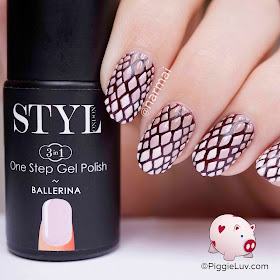 I used STYLondon Vampire Blood for the base. I'm glad I didn't just use plain black, I think the dark red base gives it an extra dimension. Even though it might be hard to see, trust me, it's there.

I also used the STYLondon UV lamp which is a big step up from the lamp I was previously using. This one is much lighter, smaller, plugs into the USB port on my laptop and it cures gels in a jiffy! Oh and I don't have to set a timer on my phone anymore, it stops automatically after a minute (it even flashes on the half minute mark).


Music is "Long Road Ahead" by Kevin MacLeod
http://incompetech.com/

I received STYLondon Vampire Blood, Sandy Lane, Barely There and Ballerina as well as the STYLondon UV lamp as a press sample. Opinions expressed are 100% my own and not influenced in any way other than the quality of the product itself.
op 7:10 PM
Share