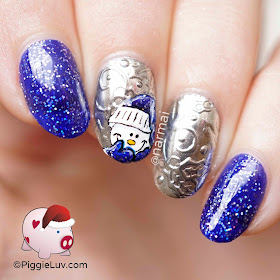 "Tis the season to be jolly!" thought the little snowman, as he planted a wide smile on his frozen face! 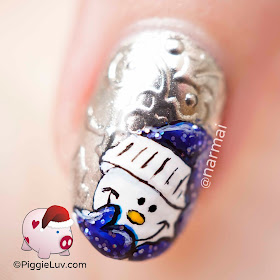 I've been editing a friend's book this week so I have storytelling on my mind. Let me tell you about the origin story of this nail art! First, there was a black coat of polish, and a pattern made with black one step gel polish. Then, a freaky lady who is too obsessed with her nails applied a magical powder called Silver Star by Mitty over it, It stuck and made a wonderous metallic relief!

Now dear readers, you might want to know that the blue glitter polish is Swan Lake by Masura and I have reviewed it here.

The little happy snowman came into creation with acrylic paint, a brush from the Winstonia Rose Noire brush set, and a whiff of magic!

I received Masura Swan Lake, Mitty Silver Star & the Winstonia Rose Noire brush set as a press sample. Opinions expressed are 100% my own and not influenced in any way other than the quality of the product itself.
op 6:56 PM
Share