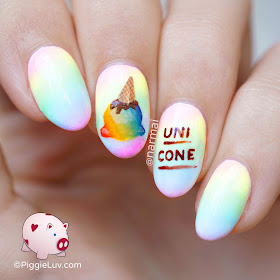 It's a rainbow uni-cone! Anything with a single horn can be a magical unicorn, right? I used Blushing Akito, April Moon, Seafoam Daisy, Forget-Me-Not, Ocean Song from the Rainbow Flowers Bath collection by MooMoo's Signatures for the base gradient. It's so sweet and smooth!!

I painted the ice cream with acrylic paint and my Fine Lines brush set from Winstonia, but the scoop was harder to paint than I had anticipated. I wanted the colors to blend into eachother smoothly, and that took a couple of coats & tries. Worked out in the end though!


I received the Rainbow Flowers Bath collection from MooMoo's Signatures as a press sample. Opinions expressed are 100% my own and not influenced in any way other than the quality of the product itself.
op 7:26 PM
Share