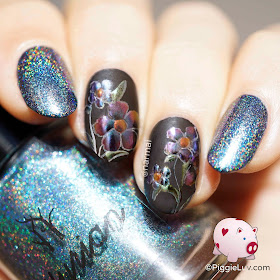 I had this multichrome idea in my head for a while now but I had trouble finding the right way to put it into action. I don't think this is the right drawing for it either but it was time to get it out of my head and into real life! 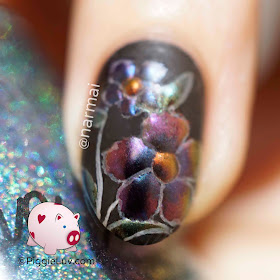 I really enjoy using these multichrome powders from What's Up Nails. They are so versatile! In this case, I used Mirage, Ocean, Rainforest and Suntan powders to color in the flowers & leaves.

I paired the color shifting flowers with a polish that is equally intriguing, the beautiful Illyrian Polish Voodoo that I got from Color4Nails. It's shown here in full sunlight but it shows an awesome shift in more muted lighting!


I received all of the multichrome powders from What's Up Nails and Illyrian Polish Voodoo as a press sample. Opinions expressed are 100% my own and not influenced in any way other than the quality of the product itself.
op 6:23 PM
Share