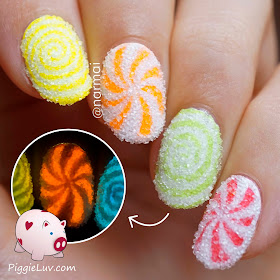 Honey, oooh sugar sugar! How about some tasty candy nail art? And hey, you know I am physically unable to do happy nail art without making it glow in the dark :-p I used real sugar too, come check out the video tutorial! 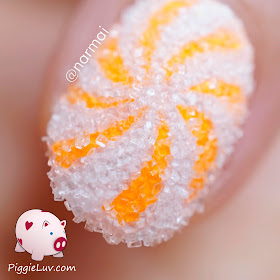 Grab some candy! It's delicious! You can just taste it, can't you? I love the texture of the sugar, it's just not really practical on actual nails... but SO much fun to make!

And nooooo I didn't lick them, not even for a little bit! 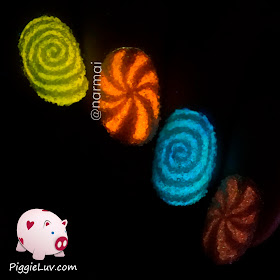 Even straight through the sugar, the glow does its 'thang'. This is Serum No. 5 Solar Power, Orange You Sunny, Kiwi Glow Now? and Raspberry Delight. I like the orange nail the most! It's so bright and lit's like I can almost taste the orange flavour already :-p

In the video, you'll see me using some kind of weird purple stuff on my nails. If you still don't know by now, here's the answer: it's Liquid Palisade from Kiesque!


Music is "Carefree" by Kevin MacLeod
Available on http://incompetech.com

I received Serum No. 5 Raspberry Delight and Kiwi Glow Now? as a press sample to make nail art with. Opinions expressed are 100% my own and not influenced in any way other than the quality of the product itself.
op 8:14 PM
Share