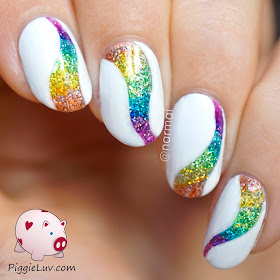 Glittahhh!!! I recently bought a mini set of the new OPI color paints and I'm totally in love with them :D The colors are vivid, they blend well and they are not at all goopy like the sheer tints (which I still love too). Ofcourse I had to try out some nail art with them over glitter! Click to see more! 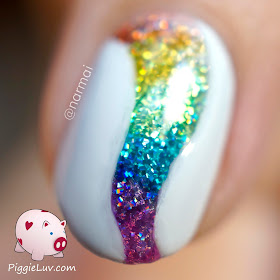 This was just a random idea I had, it reminds me a little bit of the gradient paths nail art I did back in September. Wow, that seems like a lifetime ago already! 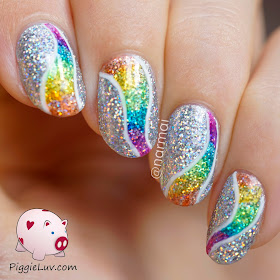 Before adding the white, it was all glitter, all the time, and it was GORGEOUS! I just think the white makes the glitter pop more, even if there's less of it visible.

I used Gosh Holographic Hero for the base (it's a Danish brand that can be found in European drugstores) with two coats of Digital Nails Supernova on top. One top for this glitter: make sure to apply enough top coat, go in with a second coat if you have to, because the glitter will be at its very glitteriest (yes I just made that a real word) when your nails are top coated to a glassy smooth finish. Trust me. 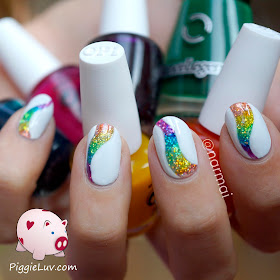 Let's talk about the OPI Color Paints, shall we? I've been waiting to see how they would perform over glitter, you all know by now that that's how I use my sheer tints most of the time. The Color Paints do REALLY well over glitter, better than expected, as long as you don't glop them on. Just use a thin coat and you'll be fine :) My mini set doesn't have green in it though, so I used Dance Legend Levitan as a substitute, and it performs very well!

In the video, you'll see me using some kind of weird purple stuff on my nails. If you still don't know by now, here's the answer: it's Liquid Palisade from Kiesque.

I received Digital Nails Supernova as a press sample to make nail art with. Opinions expressed are 100% my own and not influenced in any way other than the quality of the product itself.
op 7:07 PM
Share