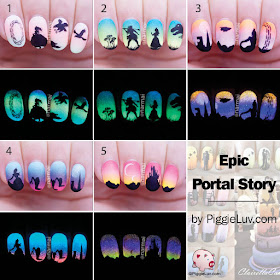 Ahhh finally, the long awaited sequel to the Epic Quest Story!!  You have asked, and asked, and asked... so I'm delivering :) Please enjoy it because it will probably be the last one I do! After 1,5 years and 8 different stories, I think I've pretty much taken it as far as it can go and it's time for something else. So I hereby present to you: the final chapters of the Epic Princess Story, plus ofcourse a narrated video! Click to see more! 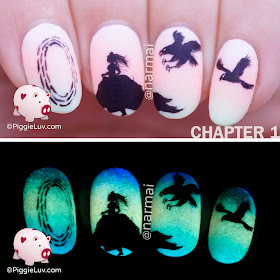 So now we find our princess running for her life, her dress is torn, and she's trying to escape the sky army! Just as the Evil Eagle is about to attack, she spots a portal to another world and she quickly jumps into it, unsure of where she will end up...

This gradient was less subtle in real life, as you will be able to see in the video way down below! The polishes I used are Serum No. 5 Starlight, Atomic Peach and Glowin' of Eden. 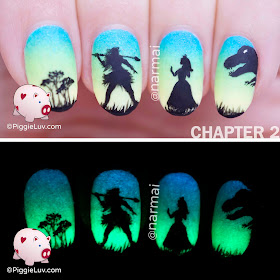 As she emerges from the portal, the first thing she notices is.... DANGER! Some primitive savage is threatening her with a sharp speer! The savage seems to be looking behind her though, and she feels a warm breath of air on her back... DINOSAUR!

For this chapter, the gradient is made with Serum No. 5 Glo-balt Blue Kiwi Glow Now? and Day Glow. 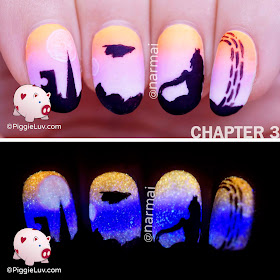 So she quickly jumps back into the portal and she finds herself in the strange surroundings of a different planet. She notices a wavy landscape, two full moons in the sky! In the distance, there's a strange city...

These happy colors are Serum No. 5 Orange You Sunny, Laven-daringly Bright and Guiding Light. I also used Guiding Light for the moons. 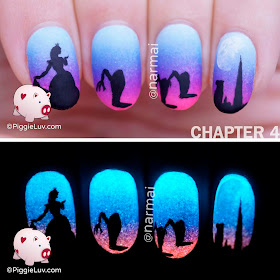 Strolling into the city, aware of the fact that she sticks out like a sore thumb, suddenly the aliens begin to kneel before her! Apparently her arrival was fortold in the ancient prophecies, and the aliens immediately accept her as their queen. Haha, idiots!

The background gradient is made with Serum No. 5 Blue Blazes, Glo-balt Blue and I Gleam In Pink. 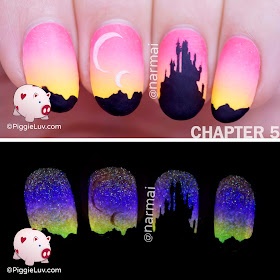 They built her a state of the art palace, where she lived happily ever after with all of her little slaves... who are still idiots.

I received  Serum No. 5 Starlight, Atomic Peach, Kiwi Glow Now?, Day Glow, Laven-daringly Bright, Glo-balt Blue, Guiding Light and Raspberry Delightas a press sample. I bought Glowin' of Eden, Orange You Sunny, Blue Blazes, I Gleam In Pink, Solar Power and Awesome Blossom with my own money. Opinions expressed are 100% my own and not influenced in any way other than the quality of the product itself.
op 7:09 PM
Share